A day at the San Diego Safari Park / Stacked Rhinos

Two weeks ago the opportunity arose to drive South to San Diego County and visit the San Diego Safari Park, which is the sister institution to San Diego Zoo. The 405 towards the North was closed so Horseback Riding was a no go for the weekend and a Zoo visit had been on the agenda for a while. We get a Membership every year, which by the way is a great deal as it lets you visit the park and the Zoo as often as you want. So driving down to San Diego County to spend time with dear friends and seeing some wildlife at the same time was a no-brainer. 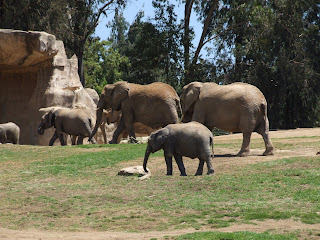 I made it to the Safari Park in no time and met up with my group of friends right as they were heading to the Elephant exhibit. It's beautiful to see these giants being so gentle with there babies. We saw that the herd had had 3 new babies this spring and compared to their mothers they were just tiny. Everything was great in Elephant Kingdom, with the exception of Dad, he was very unhappy that he had been separated, but he's a treat to the little ones and he has to be kept away.


On we went down the hill to check on some acrobats and then it was up the hill to get something to eat and look at a few other things....

Always amusing are the Meerkatz. The play with their boxes, play hide and seek or sit casually in the sun and amuse themselves. I am sure they think of us as their personal entertainment. We watched them for a while and moved on to feed the Parakeets. Well I didn't because for some odd reason, I just can't handle flying critters that close to me at all. Not even Butterflies! I love to see them and they are beautiful, but the thought of them landing on my head, my arms or shoulders just freaks me out.... I guess we all have our cross to carry. Arriving at the wooden bridge we made our way over to the Gorilla enclosure and passed some pretty domestic ducks on our way. They were were curious and didn't even care a camera coming within inches of them. 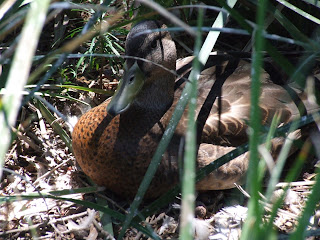 I think I woke her up. 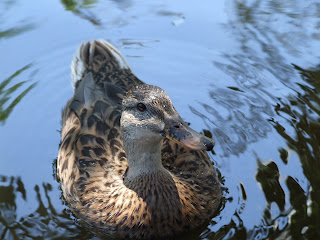 And this little one wants something to eat.

We didn't see much of the Gorillas as they were all taking naps. The only one really visible was the Silverback and he was napping as well, so unfortunately I did not get a good shot of him. Slowly we made our way down to the tram Safari and there was almost no waiting, on a Saturday.... WOW! 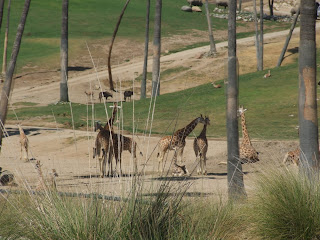 The tram takes you along the large enclosures, and we had the opportunity to see the baby Giraffes, some Somali Wild Ass with their babies, Water Buffalo, Zebra's and Gazelles. Our Tram driver gave us a lot of information about the different species and the breeding programs the Zoological Society is involved it.

We saw a lonesome Rhino in an enclosure and she explained to us that this is their oldest bull and that he had had a lot of babies with the females they have at the Zoo already, so they brought in a newcomer and had to separate him from the herd. Hoping the new bull would mate with the ladies to keep genetics fresh...... Little did we know what we would see at the end of our ride. 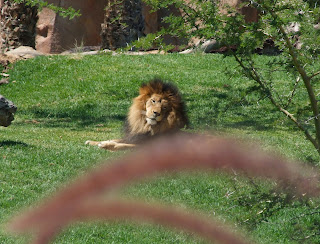 We were almost to the end of our ride, passed by the King of the Jungle and then suddenly the herd of Rhinos comes into view......


Looking over to the herd we noticed that the new male was already impressing the ladies. I guess we don't have to worry about the genetics of the Rhinos in the Safari Park anymore, as he was already mating with one of the females.


Getting off the Tram we asked our two youngest visitors of the day which animal they liked the most to which one answered.... "The ASS", the other little girl took a bit more time with her answer until she finally said: 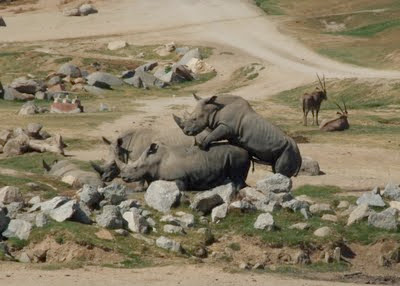