with different flour mixes.... I always wanted to make Panettone, so I tried to make a Gluten-Free version. It turned out very nice. I mixed rice, quinoa and corn flours, added in the xanthan gum and the dough rose very very nicely.

I still have to work with the moisture and the baking time, so get it perfect and maybe add some more sugar, as my taste tester found it not sweet enough. So as soon as we ate this panettone, I'll make another one, and then I'll put out the recipe so you all can bake your own.

A failed attempt at gluten-free Applestrudel

so yesterday I decided I wanted to make Applestrudel, because I haven't had it in a very long time and I had some extra apples. I was torn in between making the strudel or trying another cake with loads of apples in it.... baked apples, sugar and cinnamon.... oh my I could almost smell it.

I set out to make try and just use buckwheat flour for the dough, thought I might just be able to get away with it.. but yeah, NOT so MUCH! The color of the moistened flour already kind of threw me off.... it looked like mud, not good, but hey I kept on going, got it done and while the dough rested I sliced my apples and prepared the rest.

After letting the dough sit for 30 minutes, I rolled it out very thinly on a floured kitchen towel.. that's where the problems started... I could tell there was no way I would be able to stretch out the dough as thin as it needed to be. I guess the missing gluten does a job on the elasticity on the dough.

I rolled it as thin as I could and filled it... not to bad, but then it just started breaking everywhere... Totally uncool of the dough.. not what I wanted at ALL.


Anyhow, I baked the thing and it actually tasted pretty good... the house smelled delicious, but yeah it was UGLY.. not appetizing to look at. Complete fail on the buckwheat dough for strudel, not going to happen.

Not to worry though... I'll try to do a traditional strudel next and save my gluten free flours for other stuff. Might try again with sweet rice flour and then add some xanthan gum to replace the gluten... maybe that'll work..

In the meantime, I'll eat my baked apple mess, still tastes good .
Posted by Katja at 12:13 PM No comments:

My Review of Adjustable Round Frame Extender in Stainless Steel

Just what I needed!

This is really a great product, it adjust to all different sizes, so you don't have to get Pastry rings in every size under the sun. Great to bake the desired size of sponge cake and then use it to assemble the cake. It keeps fillings evenly distributed, without a mess, so you cake comes out with nice clear lines.
Great for layered cakes, terrines or charlottes. I will use it for years to come.

Tags: Made with Product

I got my adjustable pastry ring this evening and I just HAD to make a cake to try how it works. So I came up with a new recipe. I didn't want anything to heavy or too fattening and decided that I would use the plain yogurt I had in the fridge to make a low fat filling. To make the sponge cake base and layers I used Bob's Mill White Rice Flour

or you could also use Ener-G Sweet Rice Flour 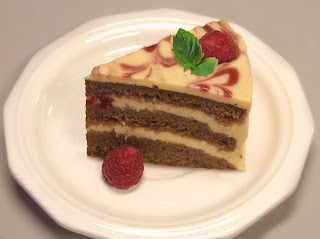 Here is what you need for the sponge:

Melt the butter in a small sauce pan or in the microwave and set aside. In a bowl whisk the eggs, amaretto and the sugar until light and fluffy, continuing to whisk add the melted butter, the cocoa powder and then while mixing add the flour little by little. Fill in the prepared pastry ring (I opened it up to about 5,5 inches) and bake in the preheated 400F / 200C oven for about 20 to 25 minutes (it's good when a wooden skewer comes out clean). Remove from the oven and let cool, then slice into 3 layers.

While your sponge cake cools, prepare the filling:

In a bowl whisk the yogurt with the caramel sauce (or you could just buy caramel yogurt), dissolve the gelatin in a little bit of hot water and then combine well with the yogurt. 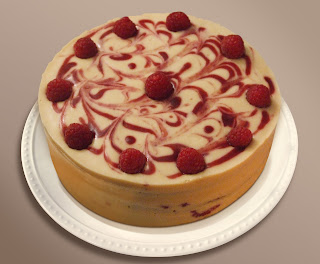 In the meantime your sponge should be cooled down and you can start to assemble the cake. Take a baking sheet then prepare a cake round ( I just cut out a circle that slightly bigger than the cake and covered it in aluminum foil). Set down the first layer and position the pastry ring around it so there is a little room between the ring and the cake. Pour some of the yogurt mixture over it and layer some raspberries, cover with the middle layer, repeat. Put on the top layer, cover with the remaining yogurt mixture, decorate with some nice raspberries and chill overnight.

PS: I'd think you can make this cake with any kind of flavored yogurt and fruit of the season, like blueberries, blackberries, or coffee and chocolate. Just really depends on your taste!

I'm really impressed with the service from the people at CSN Stores ! Their shipping department R-O-C-K-S!

I ordered my adjustable pastry ring 2 days ago and it's being delivered TODAY! How about that? Thank you thank you thank you CSN Stores! I'll recommend you to everyone I know!
Posted by Katja at 11:36 AM No comments:

Coming soon: A review of a new Baking Tool!

I've been approached by several potential customers to make cheesecakes for them, but I discovered, that everyone wants a different size of cake. The dilemma is, I only have so much storage space in my kitchen and it's impossible for me to store 10 sizes of spring form pans. So I went and searched for a solution. And I found one at www.csnstores.com ! They have everything from furniture like extra tall bar stools to fashion, look at this fabulous rain boots, to yes cook and bakeware.


I found just what I was looking for, the Paderno Word Cuisine adjustable Pastry Ring that I can use in conjunction with a baking sheet. With this great tool, I'll be able to make all kinds of sizes. Perfect! I had to have one!


I ordered and soon the friendly folks at www.csnstores.com will send it to me so I can play. Once I received and tested it, look out for my reviews! Can't wait to get it!
Posted by Katja at 2:21 PM 2 comments:

Tomorrow is a big day for me, not only is it my lovely husband's birthday, I also received a call from
Harold and Belle's in Los Angeles, that they wanted to taste and test my cheesecake creations in their restaurant. It is such an honor to have them taste my cheesecake.

So I'll be a busy bee tonight making fresh fruit coulis and mixing up my cheesecake fillings. I think I'll be going with 3 or 4 flavors

Keep your fingers crossed!
Posted by Katja at 10:12 AM No comments: