Flammekuche or Tarte Flambee is a very typical dish in the Alsace region of France. The Alsace is an area that has been going going back and forth of being either the territory of Germany or France. And the dialect of Alsace reflects that strongly, by being a mix of German and French words in one sentence.

While living in Offenburg Germany, we went over to Strassbourg often, which is the main city in Alsace. Food options over there are endless and as there are many vineyards there's also a lot of vine festivals. Flammekuche is often enjoyed with "New Wine" as a snack or just as a nice light meal with some salad and a nice glass of white wine. 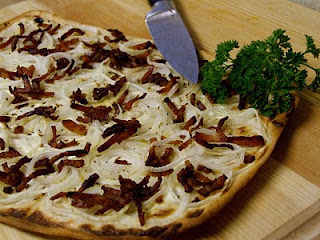 To make a traditional Flammekuche you will need

Put the flour on your work surface and make a little well in the middle, then add the salt, oil (or liquid lard) and water int he well and at the same time, using a fork, mix the water, oil and flour. After taht knead the dough so it is soft and silky and not sticky (if it feels sticky add a little flour.

Separate the dough into two pieces and roll into two very thin rounds (or just roll into one big pie or square for a bigger tarte). Cover the crust generously with the Creme Fraiche (Sour Creme), distribute the thinly sliced onion and then the Speck on top if the Creme Fraiche. Season with some freshly grated black pepper and if you like with some cumin seeds.

In the very hot oven (preheated to 450 F) bake the Flammekuche until the crust is nice and crispy and the Creme Fraiche is bubbly.

If you add the cumin, the onions will be easier to digest. Also you can make a sweet version of this as dessert. Just switch out the onion for thinly sliced apples and sprinkle with cinnamon sugar.
Posted by Katja at 10:23 AM

Yummmm... my boyfriend is from Alsace and has been begging me to make him a tarte flambee' since we came back from France. (I've been missing it too!) Thanks for this recipe!